Discover the secrets of Carmarthenshire at Alltyfyrddin Farm, home to the Merlin's Hill Centre. Walk the nature trail to the Iron Age Hillfort site on the privately owned Merlin's Hill. The specially created walk boasts breathtaking views enjoyed by Merlin the wizard.

Down on the farmyard, wander around the heritage centre and discover the area's history and traditions, and learn about farming - past and present. Alltyfyrddin is a prize-winning dairy and sheep farm. Stay and watch the Allt pedigree herd of Holstein cows being milked and meet some of their farmyard friends.

* Our large room, which seats up to 50 people, is available for meetings, functions or classes by prior arrangement. Contact us for more information.

*The Farmyard tours are wheelchair friendly.

Merlin's Hill has, at its summit, the site of an Iron Age Hillfort. Dating back to around 400 B.C., it is one of the few large hillforts in West Wales whose size alone suggests that they were centres of power controlling large territories.

When the Roman armies entered the Towy Valley in AD 75 and established first a fort and then a town at Moridunum, the modern Carmarthen, the hillfort may still have been a focus of economic power, perhaps for tribal gatherings.

In 1188, Gerald of Wales wrote that Merlin was born in Carmarthen. Merlin - King Arthur's guardian with magical powers - is believed to have lived in a cave on Merlin's Hill. This cave was to serve as his home and tomb as, according to legend, he was locked there in bonds of enchantment by his lover. Alas, the cave has become lost with the passage of time but many still hear Merlin clanking his chains on Merlin's Hill.

Please Note: The footpath leading from across the farmyard to the hilltop is private and has been created by the owners of Alltyfyrddin Farm and the Merlin's Hill Centre for the enjoyment of their guests.

The Merlin's Hill Centre is open Wednesday to Sunday, except Christmas day:

As a working farm, where the welfare of our animals are paramount, we do not allow dogs, with the exception of guide dogs.

Discounts and guided tours are available for pre-booked groups of 15 or more throughout the year.

We regret that due to the nature of the terrain, the hill avails very little access to the disabled, however, the farmyard and heritage centre are wheelchair friendly. 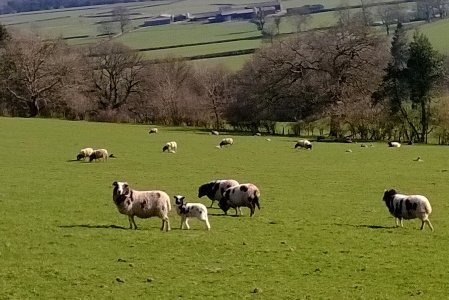 Alltyfyrddin is also home to the Myrddin flock of Jacob sheep, one of the largest flocks of pedigree Jacob sheep in the UK. This is an ancient breed and is mentioned in the Bible, they have two or four horns and have spotted fleeces. Admire and buy items from the Merlin's Hill Wool Collection - this is made from 100% pure wool from our flock of Jacob sheep which is naturally reared on Merlin's Hill. The breed's unusual colourings has provided the inspiration to create this exquisite collection of fabrics from their undyed wool. The collection includes scarves, throws, knee rugs and cushions, and are wonderful reminders of your visit to Carmarthenshire.